In 2011 I have visited few nuclear missile complexes for exploration purposes, but unfortunately our expedition failed. Yes, we got to see some 30 m deep missile silos and play with the echoes, but the command bunker was not accessible. Another complex was excavated and only one flooded missile socket was seen without a dome. This time we went to another complex and our trip ended in success. But for the start, I will explain what and why we visited.

Baltics were included into the Soviet Union in the end of WW2, divided Germany in half - The Allied part and Soviet part. At the Potsdam Conference in 1945, Truman notified Joseph Stalin, leader of Russia, that the US had a new and powerful weapon, and it would not be afraid to use it. Stalin nodded and acted as nothing has happened. Truman thought that Stalin didn’t hear or haven’t understood him, so he, after some while, said it again to Stalin, but Stalin just nodded and smiled. Truman didn’t knew that Stalin was aware of the weapon and that Soviet scientists have begun their research and work on replicating the nuclear missiles. 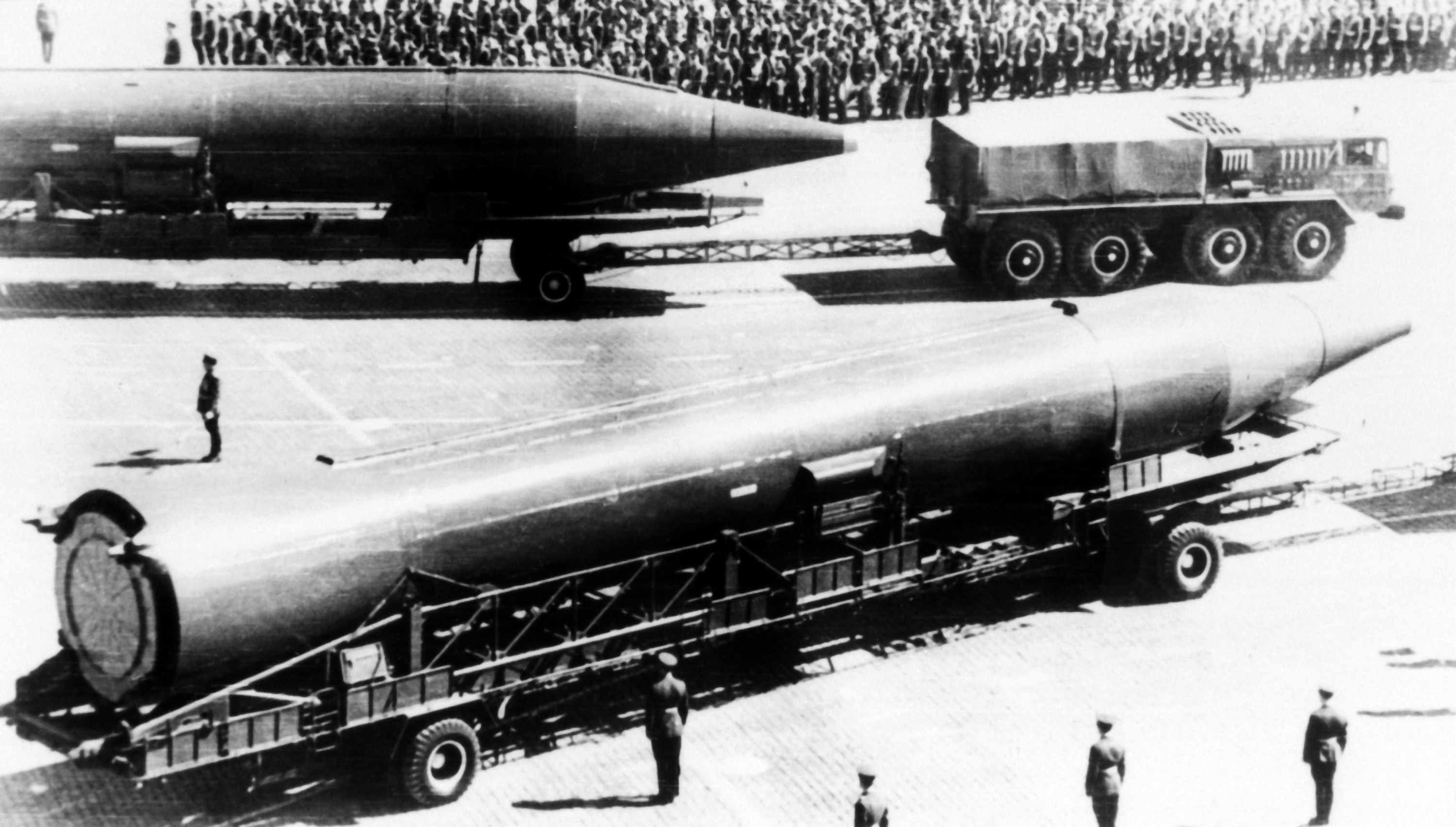 Where do Baltics and our expedition fit in? Russians made their nuclear silos at western edge of Soviet Union. The missile complexes were located verey 20 to 40 kilometers away from each other. Mainly the R-12 and R-14 missile complexes were used for these tasks. They mainly consisted of one military village, autopark, missile storage site and nuclear silo with up to four nuclear missile sockets. The R-14 is latter model which was 2 meters longer, almost a meter thicker, twice as heavier and could travel one thousand kilometers further, but carried less nuclear threat (only one or two Mt), than the R-12 rockets, which were 22 meters long, 1.65 m in diameter, weighted about 40 tonnes fully loaded.

Each worker had his job - securing, bolting, inspect war head, inspect and mend fuel cistern, check engines and report status to the officers. It was kept in a secret and nobody was allowed to show interest in other comrade assignment, so everybody stayed our of the trouble.

It took about 5 hours to prepare nuclear missiles to launch. Firstly, the officers were notified and there must be forty workers to prepare rocket for the launch. Fifteen rested in the village, while others were on duty in the silo. After an order the missiles had to be prepared - engines heated, fill the fuel, fill the oxides, mount warhead, many experts had to check each part individually - everything must be assembled flawlessly. Then the missiles were transported to their sockets. Huge, concrete domes were jacked and towed away by tanks, missiles loaded into the socket, cables mounted, officers gathered in control room. Two missiles were ready to fly. Two because it had to be fool proof.

After theoretical liftoff the socket was closed by the dome and the mending took place. Next rocket was ready to fly from this hatch only after four to five days. Reason for this was very simple - the rocket engines would melt everything that wasn’t made from enforced concrete. All metals, cables - everything.

It was -30°C outside. We marched past the village, only few hundred meters were left until the silo - that was closest we could get. The road was ravaged, so nobody could drive there. After walking 200m in freezing air, we were greeted by water vapor from the central bunker. It smelt very oddly, you could never forget that smell. It smelt like the Soviet Union. It seemed that after Soviets left, they wanted to preserve the bunker, because huge rocks once blocked the entrance and emergency exits filled with sand. They were known to take all the equipment with them and blow bunkers in many other places.

Sudden warmth confused us for a moment. It is not easy to experience temperature change from -30°C to about +13°C, which is average constant temperature under the ground. On our right there are duty rooms with downstairs ceiling missing between them, which is our floor. The same hole separated us from next room, which was staircase. After some hopping and walking on boards, we got to the staircase without any stairs, so chose to investigate further. Another large, empty room on our right, which confirmed our fears - not only Soviets took all the equipment, but even metal piece was stolen. There was hole in the floor in next room and makeshift wooden scrap ladders were made by somebody, so we climbed down on second floor under ground. Next two rooms were used for piping, generators and large tray suggested that once cistern mounted on top of it. Some funny guy made improvised doll from old tights and raggy cloth, and placed it on one of the trays of gas tank, which freaked one of us out. Next was the dead end, so we decided to go back on the first floor below the ground and carry ladders back to the entrance, where we could place it in another hole and explore other part of the second floor. Here we realized that our digital camera batteries were drained out by the cold, so our only memories will rest in our head. 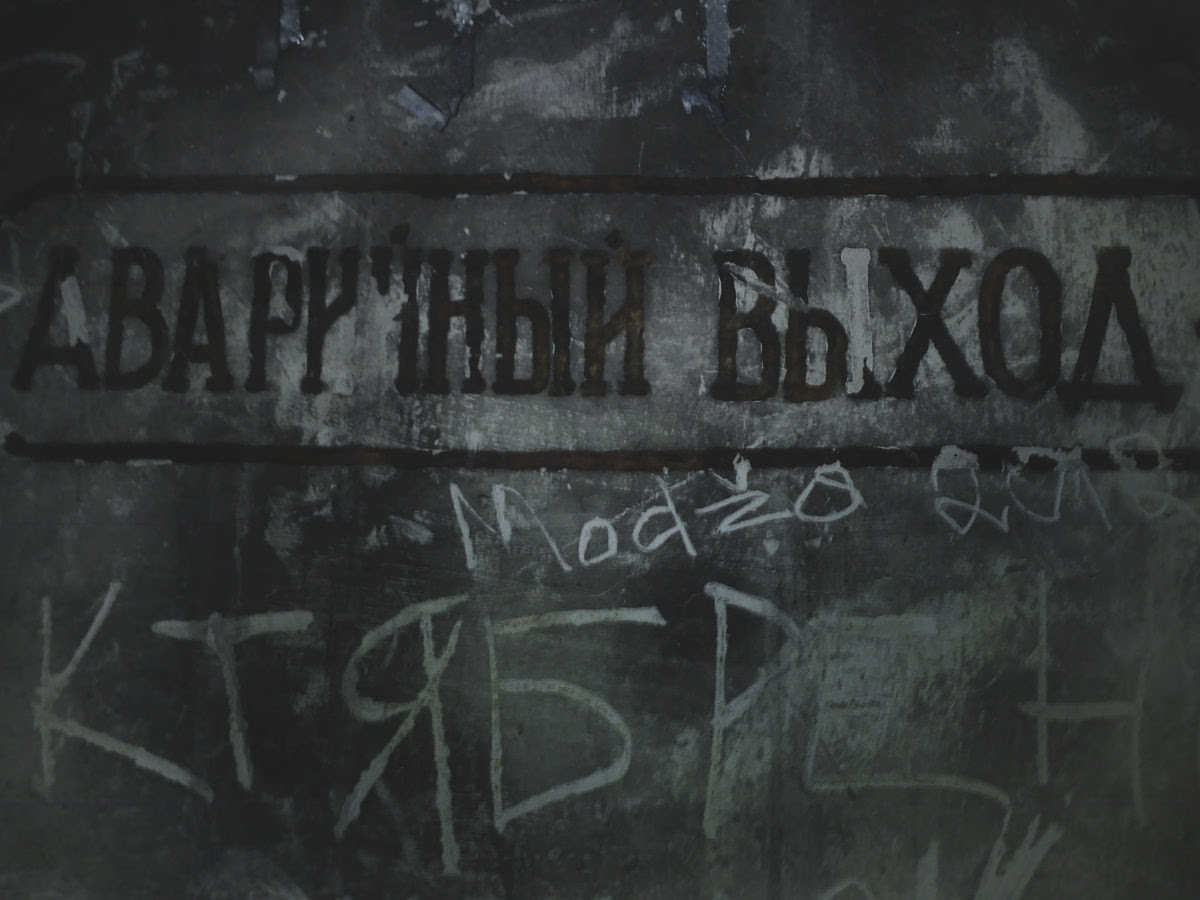 We did so and appeared in small room with two paths. One was leading to 5 centimeter thick concrete support, which used to support metal floor in the middle of long tunnel. On both sides of the support there was about half a meter of stinky, multi coloured water and gap between the support and both walls was about a meter. Second path led to some strange room with army of small, concrete stumps. Dead end. It remains mistery for us why for they were intended to. We continued to the tunnel of oily water and tried to balance ourselves on the “spine” in the middle of the corridor, which used to support the floor.

It wasn’t so bad. We balanced, or, in some cases, supported ourselves with scraps of wood to the walls, all the way to the end of the tunnel. The sand and concrete replaced water and our thin, supporting friend. Four new tunnels welcomed us and we decided to explore them in orderly fashion.

First tunnel on the left was very long and flooded, which we didn’t even enter, because all four sockets had to be identical. Second tunnel, for our surprise, was just huge tank or reservoir for something. Third and fourth tunnels were identical. Only difference between them was that one had a pair of wooden doors left. The tunnel was about 50 meters long and interesting doorway waited for us. There used to be doors one meter above the floor level, probably intended to keep blast and heat and debris from blocking the doorway and portable metal stairs were used to get there, which, obviously, are stolen now. Huge enforced concrete funnel appeared before our eyes. That was magnificent! The room itself was circular and huge funnel was in the middle of it and in that funnel the missile was intended to be placed. The socket. It had two windows in it, probably to inspect if the rocket is perfectly mounted in place and not cause the tragedy. Nobody was willing to get 2.3 Mt of nuclear blast precisely on their heads. We were on the last floor below the ground, but socket continued all the way down for another 20 meters, theoretically. All we have seen was huge concrete dome over the socket above us without any metal parts and deep pillar of black water.

All the nuclear force feared by the West once relied on this small, simple, structure. The commanders of this complex most probably were a lot more afraid of the idea about launching something so terrible from this socket which choked itself with water and sunken relics of the Soviet times. It was not how we expected it to be. It haven’t brought the awe we expected from it. It brought us pity about the deserted and forgotten object. Once it was feared all around the world. Americans frightened their children with this small bunker. It was dead and only its warm, loyal breath from the underground kept its memory alive, like last breaths of old, loyal dog in the winter that begged for mercy.

We turned off our flashlights and took our lunch in cold silence of fuzzy, warm darkness. Other room had prison-like compartments and emergency exit full of sand. Quietly not to disturb the sleeping beast, we went back out of it, -30°C cold brought us back from our thoughts to reality and silently we went back to the car never to return again.